Crowd for Angels (UK) Limited, the issuer of the Liquid Crypto Bond (LCB), is incorporated and registered in England and Wales under company number 03064807. Our offices are located in the City of London at 8 Little Trinity Lane, London, EC4V 2AN.

Crowd for Angels is an FCA authorised and regulated crowdfunding platform launched in 2014 for both debt and equity funding. It has, over a number of years, developed a sophisticated platform and has successfully funded a number of companies. CfA has recently received an investment from Legendary Investment Plc, an AIM listed company that valued our business at £3.7 million post money.

Crowd for Angels intends to raise up to £50 million of which £4.25 million will be raised in tranches on its platform. The fundraise is by way of a 5 year Liquid Crypto Bond paying 4% interest per annum.

The Crowd for Angels’ Bond is eligible for inclusion in the Innovative Finance ISA (IF-ISA), which can be opened through our platform. Interest payments on IF-ISA eligible crowd bonds are able to be earned free of income tax. The bond will also be able to be traded on our secondary market, subject to demand.

The Bond proceeds are to be used by Crowd for Angels to predominantly invest in or acquire secured crowd bonds listed on its own platform. Bondholders will therefore indirectly gain investment exposure to the bonds listed on the Crowd for Angels platform by investing in the Bond. In this way, they benefit from the advantages of what will be a diversified mix of bonds.

Repayment of Bond and Interest

Money raised via the Crowd for Angels Bond will be retained in a Designated Account, with the funds being used to invest in other secured crowd bonds listed on the platform. The invested bonds will be held by a third party Nominee on behalf of investors.

We expect the amount raised under this issue to be at all times represented by cash in the Designated Account plus the amount of purchased bonds held by the Nominee on behalf of investors. The cash flow from repayments and interest on the invested bonds will be used to pay interest due on the Bonds and to redeem the Bonds on maturity. Crowd for Angels will benefit from fees and interest differentials.

Our Initial Token Offering (ITO), sometimes referred to as Initial Coin Offering (ICO), was completed on March 31st 2018. As part of the fund raise, each £1 Bond raised will have 100 tokens attached, of which investors will receive up to 99 tokens, with Crowd for Angels retaining the balance. ANGEL tokens are being issued to investors as a reward for investing in the Bonds at no additional cost to them. The total number of ANGEL tokens that can be issued are 5 billion based on its target raise of £50 million.

Crowd for Angels expects to have the tokens traded on external exchanges within the next two weeks. In addition, Crowd for Angels has a marketplace on its platform where bonds can be bought or sold depending on demand/supply. Therefore, we expect the tokens and the Bonds to be liquid subject to demand/supply (Liquid Crypto Bond).

Investors will be able to invest using the following payment methods

Why is Crowd for Angels issuing tokens?

Using the retained tokens generated during the fundraise, Crowd for Angels will generate attention for the platform by rewarding users who complete actionable ‘events’ with free ANGEL tokens.

Users will benefit from token rewards by engaging with our website, apps, product advertising and media. This added reward will help foster user interaction, loyalty and spread content through the internal and external network.

For instance if a user registers on the Crowd for Angels platform, we will reward them with 25 free tokens. If that same user then completes their Know-Your-Customer (KYC) status, we could reward them with a further 75 tokens. These rewards will be given based on the perceived value of an actionable event by Crowd for Angels and will in time reduce with the increasing value of the token, thus rewarding early adopters more greatly.

ANGEL tokens will also be issued in a referral programme. For example, they could be issued to a current investor if they refer a friend or colleague to sign up to the platform or to third-party website owners for referring members who then go on to invest in pitches. We expect users to actively seek the tokens as stores of value. In this way we expect the additional demand to reduce our cost of investor acquisition and significantly reduce the costs of marketing compared to other traditional methods. This will provide Crowd for Angels with a significant cost and competitive advantage. 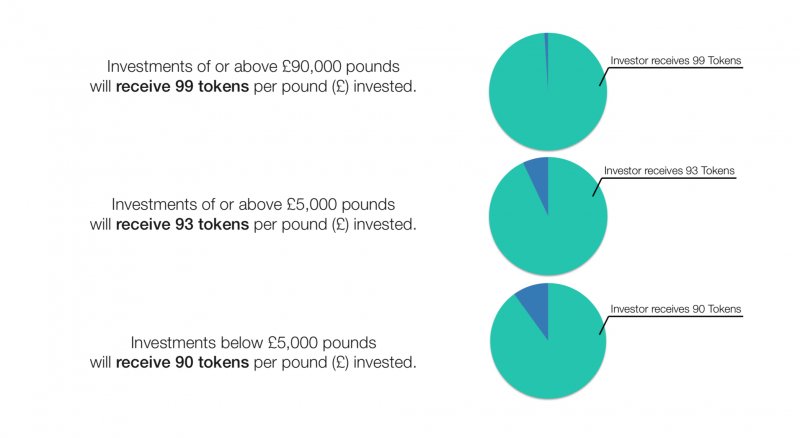 *The minimum investment is £100

Tokens are being issued to investors as a reward for investing in the Bonds at no additional cost to them. At the choice of the Bondholder, interest may be paid either in cash or tokens.

A total of 5 billion tokens will be created by Crowd for Angels. The number of tokens issued will be determined by the amount raised at each close. The balance of the tokens not issued will be frozen. The company will be responsible for the creation and allocation of tokens and Bondholders will receive their tokens soon after the offer has closed.

This is simulated by applying Gaussian noise to the exchange rate. Based on the information, the model indicates that the exchange rate of the token is likely to reach parity with sterling within the simulation timeframe. The plots below have been based on a 1,000 simulations.

Full details of the parameters used, a copy of the code and justifications can be found  in the paper called Agent Based Model in the "Document" section of the pitch. Forecasts are not a reliable indicator of future performance.

To read the full Crowd for Angels (UK) Limited pitch, please join.
It is free, quick and easy.