You are here: Home / Business

Those unfamiliar with the process may think that companies simply post their pitch on a crowdfunding platform and then go on to raise investment. But anyone who has had any experience in the industry will know it’s not that easy. Before a company can get on a platform they go through a rigorous vetting process. […] 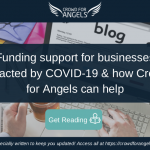 Funding for businesses impacted by COVID-19

Since the COVID-19 outbreak, business is far from “running as usual”, which is why we are writing this blog with the aim of summarising the raft of measures that have been announced by the government regarding financial support and to ensure you are aware of the latest schemes and extensions put in motion to help […]